It’s estimated male fertility challenges contribute to close to one of every two cases of infertility. So, understanding these challenges is important to improving a couple’s chances of getting pregnant. Semen testing provides the critical knowledge that forms effective treatment plans; however, diagnostics vary dramatically from lab to lab. You can trust Dr. Jeffrey Buch and his team at NTMIC Sperm Lab for quality semen analysis in Frisco, TX.

A nationally-recognized authority on male factor infertility, Director Dr. Buch has established NTMIC Sperm Lab as a regional reference laboratory for semen testing, providing accurate semen analysis for male infertility in Frisco, TX. Over his more than two decades of identifying and addressing male fertility challenges, Dr. Buch has come across many couples who have previously been told that male infertility is not a contributing factor in their obstacles conceiving. Yet, NTMIC Sperm Lab’s testing, which is held to the highest standards, draws a completely different conclusion. How can this be? Not all facilities adhere to such high standards. It’s important to recognize that semen analysis is not merely about measuring “amounts” and, by that, the numbers that suggest the volume of semen you’re able to provide for a sample, and the concentration of sperm within that semen sample. These are just two areas that can be analyzed.

If the volume of semen is less than around half a teaspoon, this indicator suggests seminal vesicles are either blocked, or don’t make sufficient fluid. Insufficient volume also indicates a potential problem with the prostate. The concentration of density of sperm in a sample should be at least 15 million per milliliter. A low sperm count can be due to any number of medical, environmental, and lifestyle causes. While these numbers are important, they only provide a partial picture of what may be to blame for you and your partner’s difficulties in getting pregnant. To get the full picture, NTMIC Sperm Lab leverages its accurate laboratory diagnostics, clinical expertise, and exacting protocols to identify other factors outside of the “numbers,” which contribute to male-factor infertility: sperm motility and sperm morphology.

After collecting a sample either from the comfort of home or from one of NTMIC Sperm Lab’s discreet collection rooms, the sample is analyzed for not only semen and sperm volume and density but also for sperm characteristics and features. Motility refers to how sperm move, while morphology refers to a sperm’s size and shape. 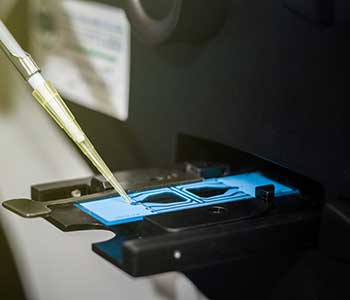 Sperm movement is measured in additional ways; for example, “total motility” accounts for the percentage of sperm that move. A “typical” total sperm motility is at least 50 percent. It’s important that the sample is not compromised in any way. That’s why if you are collecting sperm at home, it’s critical to follow directions provided by the NTMIC Sperm Lab team. You must keep your sample at body or room temperature and bring it to the lab within an hour of collection. Exposure to warmth, cooling, or residue on collection equipment can have an adverse effect on motility. You can trust NTMIC Sperm Lab’s processes to maintain the integrity of your sample.

There is a “normal” size and shape to sperm. Some of the features that laboratory technicians look for in a sample as potential “red flags” for abnormal morphology include:

Generally, normal sperm feature oval heads and long tails. The laboratory also accounts for the percentage of sperm that appear “normal” when viewed under the microscope. These defects are a critical part of semen testing, because they can affect the sperm’s ability to reach and pass through an egg.

Other factors that can influence sample quality include the “vitality” or percentage of living sperm, the chemical makeup (ph level or acidity) of semen, the amount of time it takes for semen to liquefy, and seminal fructose level. Call (972) 616-4477 to schedule an appointment with Dr. Buch to find out more about semen analysis in Frisco, TX at NTMIC Sperm Lab.

Back to Semen Analysis Page